The jewels of the South Pacific Ocean

118 islands and atolls make up one of the most beautiful places in the world. Polynesia is a French overseas community located in the southern Pacific Ocean. The island of Tahiti is one of the most famous and populated in the archipelago, receives hundreds of tourists attracted by the beautiful turquoise color of the shallow waters, the incredible coral bottoms, a spectacular biodiversity, secluded white sand beaches, forests of emerald color and luxury resorts with overwater bungalows …

How to get around

How to get to the islands of Tahiti

All flights arrive at Faa’a International Airport (Papeete), located near the city of Papeete on the main island of Tahiti. The airport is nearby and convenient to all of Tahiti’s major hotels and resorts. The airport also serves the national airline, Air Tahiti, for additional service to the other islands and atolls. For schedules and information, check with the airlines, your preferred travel professional, or visit www.airtahiti.pf . We encourage visitors to plan ahead for international air travel

Average flight time to the islands of Tahiti

Tiare’s bud . Polynesia is the culture of flowers, it is a whole and any occasion is good to give a welcome gesture, a foretaste of the sweetness with which it will be resided.

The number of necklaces on the neck of people who come to Tahiti or local people on the occasion of public events is one of the customs of Polynesia. 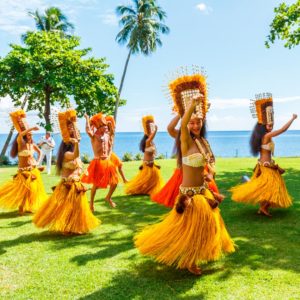 Tiare in Polynesian means flower, but now it is common to identify with this name the symbol of the Polynesian flower: the Gardenia Tahitiensis.

The flower market in Papeete is always open, day and night, and is around the municipal market where you can buy a “packet” of tiare buds wrapped in a banana leaf.

The farewell rite of greetings is just as “Polynesian.” You will be given a necklace of shells and this is a form of wish to return to Fenua (Land of Polynesia). In fact, in Polynesian legends it is said that the world is born from a great shell formed by the sky, the universe; the landmass are contained by the great shell formed by the oceans; man is born from the shell of the mother’s womb, so everything can be traced back to the shell. The best we can do is … Go back to the shell, to the origins.

The Tuamotu are islands and atolls scattered over an area of ​​1,500 kilometers, located east of the Society Archipelago and south of the Marquesas. This archipelago is a paradise of small coral islands with beaches that preserve all their natural beauty caressed by the blue ocean. The only sound that can be heard is the breaking of the waves against the coral reef, while inside, the atolls are intoxicated with the perfume of thousands of flowers. The lagoons are full of life: some 400 varieties of fish add to the charm of the islands and are a source of fascination and fun for visitors. The crystal clear waters are perfect for the cultivation of the famous black pearls, unique in the world. There are hotels in four of the atolls: Rangiroa, Tikehau, Fakarava and Manihi. 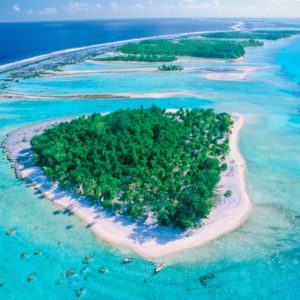 In Polynesian, Rangiroa means “infinite sky”. With its 240 motus, it is one of the largest atolls in the world. With an incomparable luminosity, with intense colors that go from jade to iridescent turquoise and violet, with a great life thanks to the innumerable varieties of species of marine flora and fauna, the lagoon is so extensive that it is impossible to see the opposite shore . Located 350 km north of Tahiti, it is the most populated island of the Tuamotu.

The Villages: Avatoru is the main town and home to administrative offices, including the town hall, the post office, a pearl farm research center, the mother-of-pearl craft center, and two churches.

The Blue Lagoon: this is the island’s favorite destination and is formed by a natural basin surrounded by a series of motus and coral reefs, which has created a natural pool within the lagoon.

TIKEHAU, THE ISLAND OF PINK SANDS 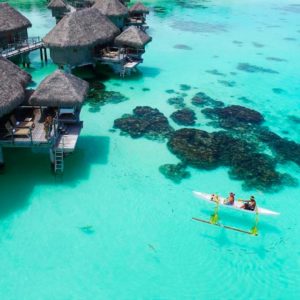 Located northwest of Tahiti and approximately 10 km from Rangiroa, this oval-shaped atoll has a series of small islets around it. The largest, southwest of the atoll, is also the only inhabited.

Tikehau offers refuge to numerous colonies of birds, including black plangas and red-footed gannets, which nest in their small motus.

Scuba diving – The beauty and abundance of wildlife at Tikeau attract scuba divers. In the Tuheiava Strait we can find rays, schools of barracuda, tuna and gray sharks.

FAKARAVA, THE ISLAND OF DREAMS

At 60 km long and 25 km wide, it is the second largest atoll in French Polynesia. It is rectangular in shape and, together with its six neighboring islands, is a Unesco protected reserve. The fauna and flora are particularly abundant here and the ecosystem remains completely intact.

Excursions: visit a pearl farm and a sea cucumber treatment center. Visit the old town of Tetamanu and one of the first Roman Catholic churches built of coral.

Diving: The waters of Fakarava are a true tropical aquarium where visitors can swim with groupers, barracudas, rays, tiger sharks and hammerhead sharks.

MANIHI, THE ISLAND OF PEARLS 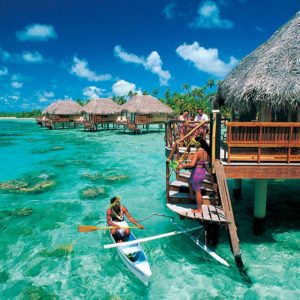 Located 175 kilometers northeast of Rangiroa, Manihi is elliptical in shape and has a single narrow passage that connects the lagoon with the open sea.

The Black Pearl: Manihi is internationally famous for the cultivation of the black pearl, and it was on this atoll that the first pearl farm in French Polynesia was created. Small pearl farms have been installed in the lagoon and a visit to one of them is almost mandatory.

The seabed: The fabulous seabeds attract divers from around the world who come to Manihi to practice their favorite sport. Schools of gray sharks come to these sea beds to lay their eggs. 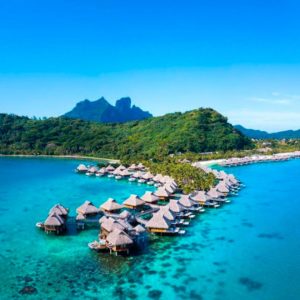 Crowned by a circle of majestic peaks, the island of Tahiti, the largest island in French Polynesia , towers over the ocean as a proud and royal queen. The mountainous interior is adorned with mystical valleys, clear streams, and tall waterfalls. Most of the island’s population resides close to the coast, leaving the interior of the island feeling almost untouched and ancient, despite the proximity to the bustling capital of Papeete. Papeete, which means “water basket”, was once a gathering place where Tahitians came to fill their pumpkins with fresh water. Now Papeete, the touchstone of this island nation, boasts world-class resorts, spas, excellent restaurants, and exclusive restaurants , nightclubs, vibrant markets, museums, pearl shops and boutiques.

As you travel through the islands, the island of Tahiti slowly reveals its beauty. It can be explored in many different ways: black sand beaches on the east coast, white sand beaches on the west coast, diving, surf spots for beginners and legendary, mountain peaks in lush desert valleys or the historic site of the colorful market. from Papeete and, or, much more.

The Blue Lagoon: this is the island’s favorite destination and is formed by a natural basin surrounded by a series of motus and coral reefs, which has created a natural pool within the lagoon. 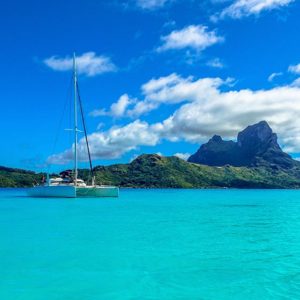 Romance. Bora Bora rises from the velvety blue of the deep waters through the softer hues of the lagoon and into the air surrounding the island. Its touch on the sea breeze dyes the skin. And its power fills every heartbeat. A short 50 minute flight from The islands of Tahiti or Moorea , Bora Bora , with a lagoon that resembles an artist’s palette of bright blues and greens, it’s love at first sight. Romantics around the world celebrate Bora Bora where the lush tropical slopes and valleys of Mount Otemanu bloom with hibiscus, while a palm-covered motu surrounds the illuminated lagoon like a delicate necklace.

Bora Bora’s perfect white sand beaches give way to azure waters where colorful tropical fish enliven the coral gardens and gigantic manta rays glide past. This could easily be defined as the center of the romantic universe. 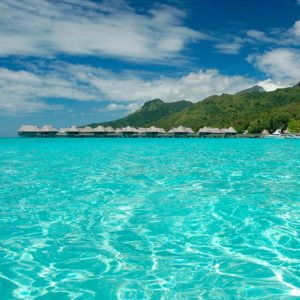 The calm waters of the lagoon and the annual trade winds from April to October allow for a variety of activities, from boating to rowing, rowing, kite surfing, waterskiing and even surfing in some of the passes. One of the islands of Tahiti , Moorea is a haven for divers who instantly fall in love with the diverse coral reef ecosystem and colorful mix of marine life. While snorkeling or snorkelling, you may find rays, sharks and sea turtles in a transparent lagoon with different shades of blue. On the mountainside, the sharp landscape is guarded by eight peaks that display a magnificent ancient volcanic crater that has now been turned into a lush valley. It is the perfect place for hiking, horseback riding, quad biking, or exploring in a four-wheeler. 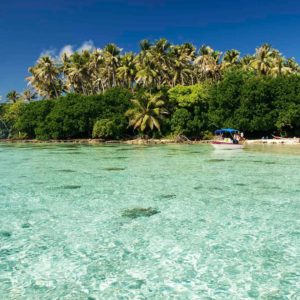 Raiatea is an incredible natural source of interest to scientists and nature lovers due to its rare species of flora and fauna. Mount Temehani is home to the tiare ‘apetahi (and 30 other endemic plants), a flower found nowhere else in the world. It has become the symbol of Raiatea. This delicate semicircular white flowerblooms only at dawn.

Raiatea is also home to the only navigable river in French Polynesia. Go on an unusual canoe ride in the heart of a dense tropical forest of purau , bamboos and māpē ( Inocarpus fagiferus ). Legend has it that the river would have been the starting point for all Polynesian migrations to Hawaii and New Zealand. 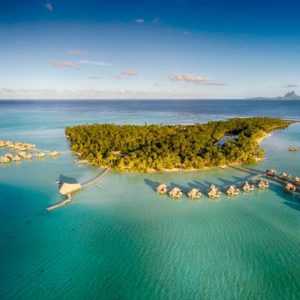 ARLife slows down on the island of Taha’a in the islands of Tahiti . This peaceful island will draw you into the traditional and peaceful life of the Tahitians. The simple beauty of the flower-shaped island comes in gentle mountains, surrounded by tiny motu with sparkling white sand beaches. Vanilla-scented vapors in breezes flowing down the slopes of numerous vanilla farms, and these soft scents ride the ocean breezes that announce the soul of the island long before you even see it on the horizon. 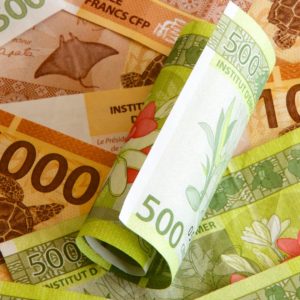 The following are accepted: all legal currencies, international credit cards, traveler’s checks (a commission of approximately 3.5 euros is charged to change them). International banks in Tahiti and the most visited islands ( Banque de Tahiti , Banque de Polynésie , Banque Socredo ), they have a currency exchange facility.

But note that some of the islands Tuamotu, Gambier and Austral have no exchange facilities. At the Tahiti-Fa’a’a airport, two exchange offices (Banque de Polynésie and Banque Socredo) are opened at the time of arrival and departure of international flights.

The official language is French, but indigenous languages, including Tahitian, are still widely spoken in each archipelago. English is also widely spoken, especially in tourist areas.

Sim to connect to the internet

For the past few years, the Islands of Tahiti have enjoyed unlimited high-speed Internet service, widely distributed throughout the islands, thanks to the Honotua fiber optic submarine communications cable system that connects the islands with Hawaii, USA. ., Which replaces satellite connections. There are two Internet Service Providers in the Islands of Tahiti, offering various service plans to keep you connected during your stay:

Health care services and facilities are available on the island of Tahiti. Papeete, Taravao (Tahiti peninsula) and Uturoa (Raiatea) have complete hospital facilities (hospitals and clinics). The other islands visited by tourists have at least one infirmary or medical dispensary.

French Polynesia enjoys a tropical, hot and humid climate all year round. There are often pleasant breezes to balance the heat and humidity. May through October is a popular time to visit – there is little rain during this time of year and less humidity.